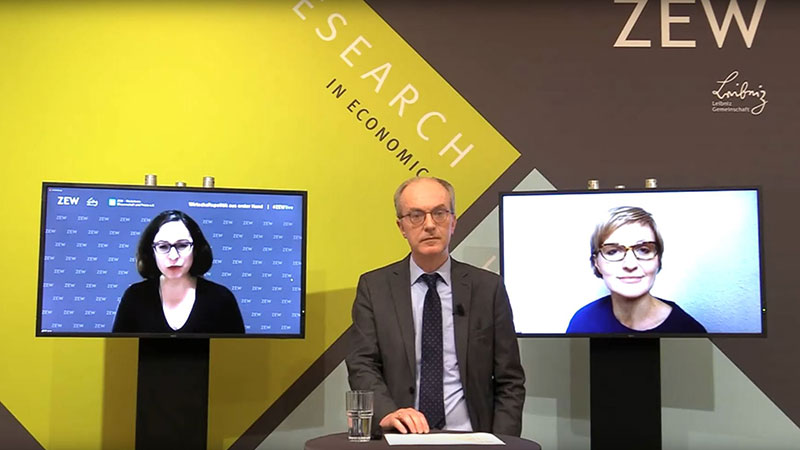 The coronavirus crisis has not only severely affected many European countries, but is also putting European cohesion to the test. While the Member States and institutions such as the European Parliament and the European Commission are largely united on the need for a European response to the crisis, there is still disagreement on how the aid measures should be implemented. Who will provide the financial means? Should their allocation be linked to reform conditions? And what will happen after the crisis?

Professor Friedrich Heinemann, head of the Research Department “Corporate Taxation and Public Finance”, in discussion with spokeswoman for the Green party’s European policy in the Bundestag, Dr. Franziska Brantner, and moderator Elif Şenel.

Dr. Franziska Brantner, spokeswoman for the Green party’s European policy in the Bundestag, and Professor Friedrich Heinemann, head of ZEW’s Research Department “Corporate Taxation and Public Finance”, discussed these questions in the second edition of the digital format #ZEWlive, as part of the event series First-Hand Information on Economic Policy at ZEW Mannheim. More than 200 participants followed the online debate via Zoom and contributed questions, which were taken up by moderator Elif Şenel.

In his keynote speech, ZEW economist Friedrich Heinemann gave an overview of the current situation. “The first phase of crisis management is to control the pandemic with lockdown measures.” In this phase, the European Stability Mechanism (ESM), loans from the European Investment Bank and the short-time work scheme SURE will help to stabilise the European economy in the short run. “The supply shock caused by the closure of numerous companies is now being followed by a major demand shock,” said Heinemann. “The second phase will therefore start in the second half of 2020, with the aim of promoting economic recovery.” According to Heinemann, the planned European Recovery Fund would be a suitable measure for this purpose. In addition, the European Central Bank has already launched an asset purchase programme to combat the crisis. A third, long-term phase will ultimately focus on strengthening the resilience of the EU and tackling problems such as the excessive debt of some euro states. This could be done, for example, through the EU’s Multiannual Financial Framework.

Heinemann also pointed out that the economic shock of the coronavirus crisis is hitting Europe asymmetrically. On the one hand, the Member States have very different room for fiscal manoeuvre: “In Northern and Eastern Europe, debt levels are within limits, but other European countries have already been in bad shape at the onset of the crisis. In Italy, for every euro of corona debt, there are ten euros stemming from an existing stock of national debt.” At the same time, it is not yet foreseeable which countries will be hit hardest by the crisis in the long term. “With the contraction of the world economy, an external economic shock is unfolding. It is possible that the small economies in Northern Europe whose prosperity depends vitally on international trade will be particularly affected in the long term. It is likely that these countries will slip into crisis when tourists have already returned to Spain and Italy.” In addition, the European states have different levels of resilience, as some administrations work more efficiently than others: “A country may decide on a comprehensive aid package – but if this is not properly implemented and does not result in payments within a few days or weeks, it is basically of no use.”

Reviving the EU Domestic Market is in Germany’s Interest

Franziska Brantner, Member of the Bundestag, emphasised that European solidarity is essential to combat the crisis. “I hope that we will overcome these first difficult weeks of the crisis if we just act jointly now,” she said. “We must give the European Commission sufficient competencies and must not fall back into national reflexes.” She said it had been terrible for Italy that no country had followed its call for a European civil protection mechanism. “In addition, Germany and France imposed export bans so that paid orders never reached Italy. This has caused a great loss of confidence.” In recent years, Europe has experienced repeated crises of solidarity, be it in terms of receiving refugees or regarding energy issues. “I believe we cannot solve these crises of solidarity one by one, but we must once again apply Helmut Kohl’s method and bring different things together. Everyone contributes something, everyone receives something, and in the end everyone benefits.”

The politician also praised the move by German Chancellor Angela Merkel and French President Emmanuel Macron to increase the European Recovery Fund and finance it with one-off European bonds. “It is in our very own interest that all countries have enough money to spend. Germany currently accounts for 51 per cent of the government expenditure programmes that have been launched in Europe. The domestic market will be disrupted if competition becomes too distorted.” In addition, it is reasonable to support needy states with subsidies instead of loans. “There is a danger that further loans will push Italy, Belgium and other states even deeper into excessive debt, thus triggering a euro crisis.” Another advantage of subsidies is that the European Parliament will have a say. “Subsidies have democratic legitimacy, and political objectives can be linked to them. In addition, the European Court of Auditors can monitor the use of the funds.”

ZEW economist Heinemann suggested that crisis management should not be limited to government spending. “There are a number of countries, including Germany, in which the tax system is a barrier to growth,” he explained. “High marginal taxes for average earners are enormous obstacles to growth. Why don’t we also use the money to implement a growth-oriented tax reform?” This would result in a loss of tax revenue, he said. However, this is likely to be more beneficial to growth than a new EU fund. “Not every euro is better spent at European level than at Member State level. There needs to be a clear justification for joint expenditures.” He raised the question of why the EU is not financing the Recovery Fund by phasing out direct payments to farmers – so far one of the largest items in the EU budget. “The benefit would therefore be twofold, since we would finance the crisis policy today, and in future we would shift the EU budget towards European added value.”

According to Brantner, it would also be possible to repay the loans from the Recovery Fund with European funds, for example from the revenues of a digital tax. Another possibility would be to take a firm stand against tax evasion in the EU. “Europe is losing several billion euros a year through VAT fraud. The EU could take up the fight against tax havens among its Member States and use these funds, thus tackling two issues at once.” Brantner also called for funds to be channelled into crisis management by linking them to modernisation and innovation measures. “One proposal is to invest in a really strong hydrogen strategy for Europe. I also think it is urgently necessary that we establish a European supplier for 5G.” She also advocated linking aid to core European values. “Countries that are currently dismantling the rule of law and democracy should receive less.”

#ZEWlive: The Coronavirus Crisis and Europe’s Response
Back to news overview