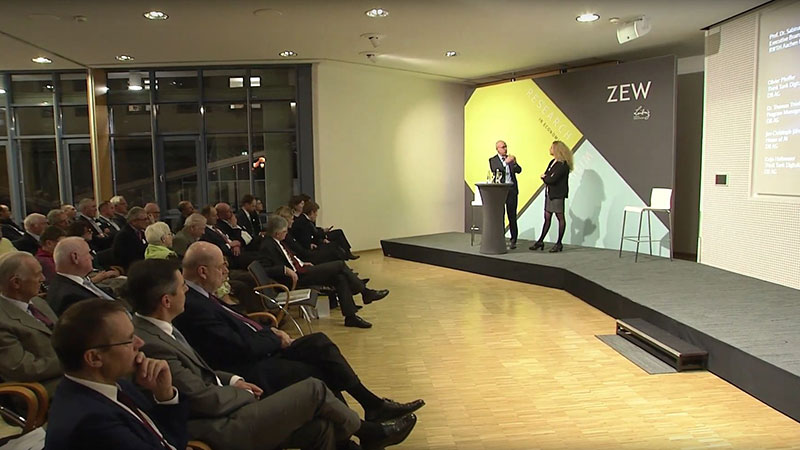 We are currently experiencing the fourth industrial revolution, as the radical breakthrough of artificial intelligence (AI) has taken digitalisation to a new level. Intelligent systems are connecting with each other in real time, they are capable of dealing with everyday situations and even develop creativity. And this is only the beginning. This was the main message of the talk held by Professor Sabina Jeschke, member of the Management Board for Digitalization and Technology at Deutsche Bahn AG, at ZEW Mannheim as part of the event series “First-Hand Information on Economic Policy”.

In her presentation at ZEW DB board member Prof. Dr. Sabina Jeschke spoke about the future of artificial intelligence.

In her lecture entitled “3 Shades of Artificial Intelligence – 5G and Quantum Computing Setting the Stage for Next Generation AI”, Jeschke provided an overview of the current and future developments in the field of AI. In front of an audience of around 130 guests from the realms of science, economics and society as well as members of the ZEW Sponsors’ Association, she drew examples from her own experiences as a manager, professor and four-time winner of the RoboCup Logistics League World Championship, where teams of robots compete against each other in an industrial scenario.

While the first and second industrial revolution were driven by energy-related advances, information is the driving force behind the third and fourth industrial revolution. The main innovations of the 20th century are computers and robots. Now is the time of interconnected, autonomous systems. “Up until now, we have had mastery over our systems. But in order to ensure that systems are adaptive and safe, we have to let them learn,” explained Jeschke. “This is a nightmare for engineers. The strength of German engineering lies in its high degree of perfection and technological skill.”

According to the board member of the Deutsche Bahn, the fourth revolution is characterised by three innovative features. Firstly, intelligent systems have reached a new level of complexity, allowing them to navigate through our day-to-day life. In addition, the sensor information networks combining different devices are making way for a new concept of intelligence. “It is as though we are able to borrow our children’s eyes and see what our homes are like,” said Jeschke. Finally, AI systems have acquired spatial awareness. They have also learned how to draw, make music, even dream. This means that creativity is no longer limited to the human domain.

It is ten years since we have entered the first, algorithmic phase of the fourth industrial revolution, Professor Jeschke explained. The focus is currently on developing technical systems that are capable of learning. In this context, she identified three different forms of machine learning. In the case of the so-called “supervised learning” approach, AI systems are provided with training data, so that they can learn how to identify predefined patterns. In contrast, “unsupervised learning” algorithms work on their own to discover how information can best be categorised. “This is interesting because much information from data is difficult for people to identify – for instance in medical research,” stated Jeschke.

Another type of machine learning is called “reinforcement learning”. In this case, AI systems make repeated attempts to achieve a set goal and receive responses following a carrot-and-stick-approach. Highlighting the key benefit of this method, Jeschke explained: “Companies operating in the European area are often subject to restrictions due to data protection. Start-ups usually do not have many data. And much of the data they have is of poor quality, making it unsuitable for processing. For the reinforcement approach, however, we do not need any data.”

Germany needs to catch up in the area of AI

Jeschke’s talk was, however, not limited to the current developments in the field of AI. She announced that we would reach the next phase in two to three years. In this context, the interconnectedness of systems will be of crucial importance. By introducing the new mobile standard 5G, it will be possible to decouple the intelligence of a machine from its hardware and transfer it to the cloud. To illustrate this development, Jeschke explained: “The emergency stop function of autonomous cars is around ten times faster than human reaction. However, if the sensor data first has to be transferred to the cloud and back, this effect is completely lost. 5G minimises this latency period, and we will be able to separate the hardware from the intelligence.” Since computing processing power doubles approximately every 18 months, cars and other devices are becoming ever more intelligent.

These new possibilities, however, also place high demands on the computing power. According to Professor Jeschke, it is not possible for the Deutsche Bahn to calculate the complete train schedule data at once using present technologies. In the medium term, Jeschke expects quantum computers to take over this task, not least for reasons of energy efficiency. “Today, we are experiencing a massive consumption of materials. The amount of energy required is out of proportion with its function.” Jeschke assumes that, in seven to ten years, we will also have reached this third phase of the fourth industrial revolution.

While Europe is currently in the first phase, lagging far behind the US and China, it is not yet too late to make up for lost ground. “We are currently around 15 years behind in terms of our ability to process data via platforms like Facebook. When it comes to quantum computing, we might be lagging behind two years,” explained Jeschke. At the same time, she also warned: “If we spend two more years discussing matters, we will be four years behind.” With Germany being a “car nation”, it will be of crucial importance to follow the lead of these countries and establish the 5G standard. According to Jeschke, Germany has a solid economy and the ideal conditions to become a major player in this area. “We have the potential. I believe, however, that this is not yet enough,” said Jeschke, concluding her speech.

The lecture series “First-Hand Information on Economic Policy” is kindly supported by the ZEW Sponsors’ Association for Science and Practice.